We arranged with Jews for Jesus to have a full seder at our church on the Wednesday night before Easter and they sent a man named Avi Snyder to lead us. Sometimes you hit it off with another and that is what happened that night. He showed up early and we talked. We arranged to go out for breakfast again in the morning and spent some more time fellowshipping together. He demonstrated that he is a man of wisdom and insight – we agreed on so many things! He told me he had a book coming out soon and promised to send it to me. I promised him I’d write a review of the book here. I am only about 12 reviews behind (if I have promised you one, I will get to it before my 75th birthday!). But I read Avi’s book almost as soon as it came.

And it annoyed me!

No, what Avi said did not annoy, just the fact that someone had to write such a book. Avi is a Jew (you may have surmised that from the fact that he works for Jews for Jesus and led our church in a Seder) and after a lifetime devoted to evangelizing his fellow Jews, he wrote a book countering the arguments Christians are using to advocate against the need to share Christ with Jews. Evidently, there is a growing sense among many self-described evangelicals that we need not preach Christ to Jews. That would come as a shock to the Apostles who suffer persecution for doing so, but that is what many today are saying. Did you get that? We don’t need to witness to Jews?

It annoys me that Christians would say such things, but Avi assures me that he is encountering resistance not only from non-Christians who do not want to be evangelized but from fellow-Christians who believe that what he is doing is either unnecessary or harmful. 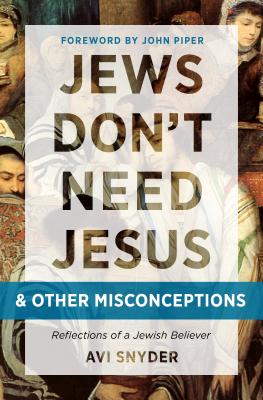 Because of the resistance he has encountered, Avi wrote his book, “Jews Don’t Need Jesus & Other Misconceptions: Reflections of a Jewish Believer.” This book from Moody Press is excellent and well worth your time. The Foreward to the book is written by someone named John Piper – never heard of him. There are three sections. First, Avi deals with the theological issue of whether Jews need Jesus in chapters 1 and 2. Chapters 3 through 18 deal with 16 misconceptions he has encountered in his evangelism efforts concerning witnessing to Jews. The final section, chapters 19 and 20, exposes the real reasons he believes people do not witness to Jewish people.

Each chapter is a gem. This is not a book of theoretical theology. Avi has spent his life doing street witnessing and other types of evangelism with Jewish people and this book is forged from practical experience. It is not a long or a heavy read, but it is biblically sound.

I highly recommend this, especially if you have encountered these issues or if you are involved in witness to Jewish people.