The Tourney Challenge has come down to two people, and if it weren’t for that rascal Jeremy Parks, I’d be one of the them!

The front-runner in the bracket challenge is “Adam G in NC” who has 1170 points, a substantial lead (130 points) on second place (DisneyDavisClan). Both of these entrants have selected the evil and despicable Duke Blue Satans as the National Champions, so if the Dookies win, Adam is our tourney champ. The next six spots in the standings are taken by folks who went over to the dark side and chose “Tom Riddle” Calipari as their champion. They are done scoring points and have no chance to win. In 9th place is “killer toenails” who probably needs both psychiatric care and bracket help, since he (she?) also chose Duke and can at best finish 3rd if evil prevails and Duke wins.

In 10th place is Jeremy Parks, who is behind by 230 points, but who chose the champions of the only conference with TWO Final Four teams (and, I might add, the victors of the Football National Championship Tournament in 2014), the Big 10. If Wisconsin wins (and all people of good will and sound mind hope that they do), Jeremy will gain 320 points which will put him in first place. After the 11th place person (Daniel Harding, another victim of Kentucky hype), I stand in 12th place, having also selected the Big 10’s champions to beat Kentucky in the semi and win it all. Being 280 points behind, I will vault into second place with a Wisconsin win. So, if my good buddy Jeremy had just picked someone else, I’d be in contention for the W!

Jeremy and I were the only people with the wisdom to pick Wisconsin to win it all. Over half the contestants failed to realize the overall weakness of the SEC and bought into the Kentucky hype (yes, I’m purposefully trying to be offensive here, to drum up discussion and get an argument going – I actually greatly feared a Big Blue victory). Only 3 people picked Duke, and we can all hope they walk away disappointed, right?

Todd Benkert picked Louisville, which might have worked had they not been forced to play a middle-of-the-pack Big 10 team to go to the Final 4. Mike Leake picked Virginia to win it all, but unfortunately, they also had to play that middling Big 10 school and couldn’t handle it. Doug Hibbard chose Arkansas to win it all (really?) which lost to UNC (chosen by Jim Shaver) which also lost to a Big 10 school in the elite 8.

Seems like the ACC did pretty well until they had to play the Big 10, eh? Hope that trend carries through to the final game and 3-0 becomes 4-0 on Monday night. 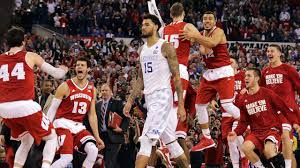