Imagine that the apostle Paul has an iPhone with Instagram capabilities. Do you think he would send this out to all of his Jewish friends: 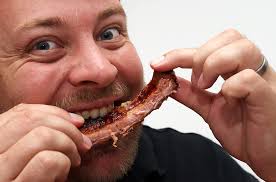 Because of the work of Christ people are now free to eat bacon. Yet, some early Christians had a difficult time making this transition. They grew up thinking that everything that came from a pig was dirty and defiled. In the same way some Gentiles had a difficult time eating food that had been previously offered to idols. Others believed they were free to do anything.

This was Paul’s response to both:

You can ask several questions of this text and debate them all day. But one thing is clear. The gospel caused Paul to be absolutely “others” focused. It’s the same thing he said in Galatians 5. “For you were called to freedom, brothers. Only do not use your freedom as an opportunity for the flesh, but through love serve one another.”

I don’t see Paul sending an Instagram photo of him eating bacon so as to teach people a theology of freedom. He didn’t flaunt his freedom as a way of showing the supremacy of Christ. In fact truly free people don’t flaunt their freedom, they quietly enjoy it. When you are free—and really living in freedom—you aren’t focused on the freedom itself. In Christ our focus is now on our liberty to truly love and follow Christ and lovingly serve others.

And that’s what has me bothered by much of the behavior of my generation when it comes to Christian freedoms. We pretend like Jesus Christ died to make us free–and then we stick a period on that statement and move on. But there isn’t a period there. There is a comma. Jesus Christ died to make us free, so that we can “through love serve one another”.

Listen, the last thing I want to do is give a list of rules. When we are talking about these Christian freedoms I don’t think “right/wrong” is the most helpful question. It’s usually an issue of wisdom and an issue of love. So I propose three questions to ask ourselves about our freedoms:

There is more to be said on this, but I’ll leave it there for today…