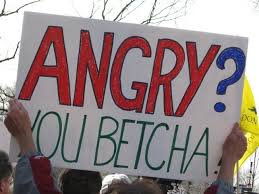 It didn’t take long after the Josh Duggar story hit the news for one of my Facebook friends put up a post chiding evangelicals for our lack of outrage about the situation.

“Where is the outrage about the Duggar scandal among conservatives?”

This man is a former Southern Baptist who “went out from us” and sometimes highlights what he sees as the shortcomings of conservative evangelicals. Let’s face it – we give plenty of opportunity for such observations, don’t we? But I’ve heard that phrase over and over again in a wide range of social circumstances. Why aren’t you outraged about this? Why aren’t you outraged about that?

We can expect, in the days ahead, an absolute barrage of criticisms of conservatives and evangelicals as a result of this unfortunate event. The secular press is not known for its subtlety in dealing with evangelicals. It seems to use only the broadest of brushes. But concern is with the question that was asked in this circumstance and in so many others.

When did outrage become a godly virtue?

It’s almost become a contest – the more spiritual you are the more outrage you display over the wickedness in our culture. “I’m more outraged than you are about this social evil!” “No you aren’t! I’m way more outraged than you are.”  We demonstrate our spiritual maturity by our anger, by being incensed and this wickedness or that. But where do we see this in the Word of God? Where is outrage recommended as a cure for social ills?

In fact, there are quite a few Scriptures that tell us exactly the opposite. I’ve been teaching and preaching through Colossians 3:1-17 on Sunday mornings. Paul couldn’t be much more clear in verse 8.

But now you must put them all away: anger, wrath, malice, slander, and obscene talk from your mouth.

What was wrong with Paul? Didn’t he know that social engagement REQUIRED anger and outrage? But no! He called on us to put all these away. In James 1:19, James instructs his readers to be “slow to anger.” How old fashioned can you be! Just terrible! But he had a reason for his advice, one that he spelled out in verse 20.

…for the anger of man does not produce the righteousness of God.

It’s pretty simple. All the anger and outrage in the world isn’t going to accomplish a single productive thing in the kingdom of God. I can be outraged morning, noon, and night and I might feel good about myself for my social consciousness, but I will accomplish nothing – absolutely nothing – of eternal import. My life will be an angry waste.

We accomplish God’s will by sacrificial love. We have weapons of warfare that tear down strongholds. They are not anger, malice and “outrage.” Outrage is useless, pointless, displeasing to God and a great big waste of spiritual energy.

What are our spiritual weapons?

Make no mistake, the church should be a safe place for children and for women. Any view of the biblical teaching on gender that gives the idea that women and children ought to endure physical or sexual abuse without recourse is despicable heresy. We ought never shield those who harm women or children or help to shield them from the law. Call the police. Report. Support the victim. Stand on the side of the hurting. The days in which the church turned a blind eye or actively engaged in cover-up needs to be gone.

This post walks a fine line. Victims of abuse carry a deep and painful burden. I’m not trying to trivialize it or give pop-religious advice like “forgive and forget” or “just move on.” We cannot be flippant or simplistic about the difficulty of forgiveness. But neither do we help hurting people by counseling them to ignore the commands of Christ! He demanded that we love our enemies and forgive those who sinned against us – and did not make exceptions based on the severity of the offense. And he never told anyone, “Go thou and be outraged!”

We go into this world armed with an amazing and transforming power – the grace of Jesus. Jesus goes to work in our angry, hurt, brutalized hearts to clean them and make them like his own. It is a long and sometimes painful process, often hindered by the church and its failures. But it is a glorious process nonetheless.

But for the sake of Christ, let’s stop lying to people that their outrage will somehow make a difference.

So, let me answer the original question. Where is the outrage?

Hopefully, under the blood of Christ with other sins and fleshly weaknesses. Gradually, it is being replaced by the weapons of warfare of Christ, supernatural weapons that have power to pull down strongholds!

In Christ, that fleshly, useless OUTRAGE is being replaced by something useful, productive and pleasing to God.