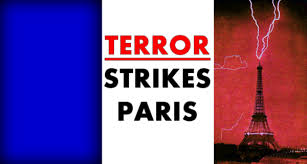 It was an early Tuesday morning 14 years ago – September 11. Our world changed.

It just happened again. This time it didn’t happen in New York or DC. They didn’t use airplanes. It happened in France, one of our allies – one we like to ridicule.

A few moments ago they arrested one of the men who said he was with ISIS that this was a coordinated attack. Who knows what the truth is? As was true on September 11, the truth will not be known for days and even weeks, and maybe longer. It will take time to sort all of this out. Yesterday our forces attacked in Syria. Today ISIS struck back in a much more dramatic way in one of the West’s great cities. Paris. This is unlike anything that has ever happened in our history.

We may find out that this is a coordinated ISIS operation. Maybe it was just some sympathizers willing to die in the name of ISIS. Time will tell the tale. I would make the following observations – preliminary and perhaps premature.

The war on terror isn’t something happening in Syria, Iraq, or other Third World States anymore. They are bringing the battle to us. They don’t have to coordinate their attacks; all they need is some lone rangers willing to kill or die in the name of radical Islam. ISIS, and whatever the next iteration of evil might be, will not be content to sit in the deserts and behead a few people waiting for our drones to strike. They are going to bring the battle to us.

Politicians have often showed a lack of willingness to look this thing in the eye and call it what it is. We are at war with radical Islamic terrorists. We cannot continue to pretend that this is the “JV” or that we do not have to put all our resources behind this. Radical Islam is the enemy.

We’ve been discussing a whole bunch of issues in the 2016 presidential debate. All of that just faded into the background as national security and the war on terror just jumped to the front of the stage again. Whether a candidate can handle global terror is going to be the decisive issue.

4. What we have been doing hasn’t been working.

Pretty clear there. We have gone over and fought wars in the Middle East, then the pendulum has swung toward the isolationist side and we’ve left nations we’ve conquered to descend into chaos. This swinging pendulum – from Bush’s aggressive nation-building to Obama’s waffling and retreat – we’ve not articulated a clear and consistent policy, we’ve left a power vacuum that the radicals have filled, we’ve chosen the wrong horse in the race several times, and we have made very little progress in 25 years since the first Gulf War.

5. This is one of those moments when the way forward is unclear.

Will there be more attacks? Here? Other European nations? How will we respond? Will America come together again or will we continue to play partisan games?

In a world like this, we cannot…we cannot….WE CANNOT… We absolute cannot allow the International Missions retreat of the SBC to continue. Yesterday, the word is that we ended the evil of Jihadi John with one of our drones. Killed. Dead. Gone. But that doesn’t really end the problem. There’s going to be another guy who will step forward with a knife to take his place. The problem isn’t going to be solved by drones. But the gospel is still the power of God for the salvation of anyone who believes – Jew, Gentile, and Muslim!

I am going to use my vote carefully this coming year, in hopes that we will elect someone who can handle these evil men. I’ve been stating my support for Marco Rubio, but as of this moment, I’m uncommitted again. Who can handle this issue?

But ultimately the answer is Jesus. We cannot retreat. We need to lay aside our internecine and petty wars, reorganize as we need to, and get our world missions effort back on track. We are moving back under 4000. That needs to change. We need to get up above 5000, 6000, 10,000. Because it is not a Jesus Juke to say that our Savior can do in the Middle East what politicians, armies and aid workers cannot.

7. Pray for France. Pray for the Gospel Work in this world.

This world sucks. Sin does that. It is an awful place. Maranatha. In the meantime, let us pray for the people dealing with this, the families affected by it, the governments who will respond to it, and those who will carry the gospel to the ends of the world to fix the root cause!