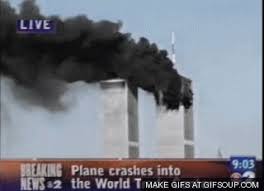 I wasn’t around for Pearl Harbor and when Kennedy was shot, I was a kindergarten kid. The teacher called us together and told us that the president had been killed. Oh, I thought, can we go to recess now? I remember when Reagan was shot and while that was quite a morning the fact that he survived meant the trauma of that day did not quite rise to the level of the others. For me, the ninth inning of the seventh game of the 2001 World Series ranks up there, but others will simply see that as crass and inappropriate. (And it is!)

But I will never forget September 11, 2001. Never. I was waiting for a group of preachers to arrive at my home for a weekly pastors meeting we had. I flipped on the TV as I waited and the moment I did, a plane flew into a building – wasn’t it around 8:02 (Central)?  It was the second plane. The first plane had hit a few minutes before and people were wondering what was going on, but when the second plane hit it removed all doubt. We were under attack. Life has not been the same since. That day let us know that this terrorism fight was not something that was going to take place on foreign shores, like all the other wars of my lifetime. They were going to bring the horror to us.

Denny Burk tweeted something amazing this morning. The freshmen at Boyce College that he teaches were 4 or 5 years old at the time of the attacks. They barely remember the day. Can you believe it? Kids in college who were the age I was when Kennedy was shot! It’s been 14 years.

The floor is yours.