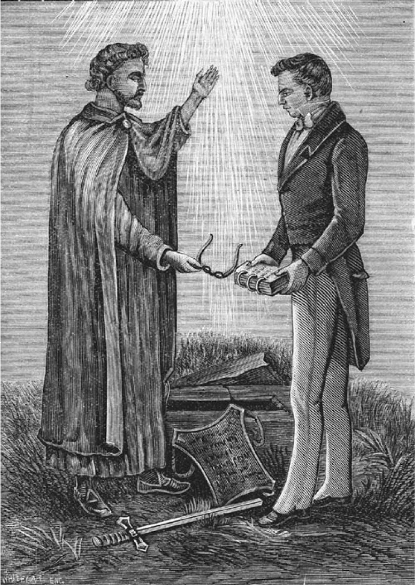 Awhile back I had the opportunity to share the gospel with a couple of Mormon missionaries. They explained to me the way that Joseph Smith received the Book of Mormon. Here was a bit of my response.

“So…let me get this straight. Joseph Smith saw these golden plates. And he was permitted to read them. But nobody else was with him…”

They corrected me and informed me that one other fella was with him and saw some of it, but later denied the whole thing. (If I’m getting some of my Mormon history incorrect please forgive me, I’m only going by what these two chaps told me).

“No, he tried to show other people,” they informed me. “But when he went to show them the plates had disappeared and an angel told him later that they weren’t ready to see it. So yes, Joseph Smith was the only one that saw the golden plates. And no, that doesn’t bother me. We have faith. It is by faith that we believe and receive these things.”

Now pause with me for a moment and ask yourself a question. “Is my faith different than that of these Mormon missionaries?”

Sadly, a number of Christians have an understanding of faith that is similar to these Mormon missionaries. Their faith is a blind faith. It is a faith that values the unverifiable claims of Joseph Smith as somehow a more pure test of faith than a reasoned faith.

In part I believe this comes from a misunderstanding of John 20:24-29

in the account of the aptly named Doubting Thomas. Here Thomas refuses to believe that Jesus is really resurrected until he can see with his own eyes and touch the wounds of Jesus with his own finger. The Lord Jesus in his grace shows up and admonishes Thomas to touch his side. As he does this he admonishes Thomas, “Do not disbelieved, but believe”. Thomas responds in faith—a faith that responds to sight.

Jesus notes his faith as sight response and then says, “Blessed are those who have not seen and yet have believed”.

We have imposed this idea of blind faith onto the text. What Jesus is contrasting is the faith of Thomas and the other disciples—that see Jesus with their eyes and were able to touch him with their hands—with that of those that will believe after the Ascension. Once Christ returns to the Father then the faith of sight is no longer an option until His return.

Yet this does not mean that our faith is a blind faith. Notice the way that Paul reasons with the Corinthians in 1 Corinthians 15 about the resurrection. He points to the written Word of God in 15:3-4; the written—verifiable, see with your eyeballs and see with your brain–Word of God. he then backs it up with eyewitness testimony in 15:5-6; go ask those 500 other dudes that are still living and they’ll tell you the same thing, type of testimony.

There isn’t in 1 Corinthians 15 any sort of, “Well, you see we saw an empty tomb and the risen Lord, but whenever I went to go tell somebody else…well the darndest thing happened, he was back in the tomb and he had disappeared. But you know I still believe what I saw—after all that is faith—believing in something that cannot be verified”.

There is none of that. And there is none of that because the Bible doesn’t exalt blind faith. There is the faith of sight that was given to the apostles and will some day be given to us. And there is reasonable faith—an I’ve tested this thing and found it legit type of faith. But there is no such thing as an “I just feel this in my heart and know that it’s true” type of faith in the Bible.