I am not the SBC Voices expert on sex abuse, nor on any component of SBC sex abuse solutions. But, I do read the things that pertain to it.

Last week I wrote an article about the Sex Abuse Task Force and the deadline that is drawing near for the report of the investigative firm, Guidepost Solutions, LLC, to be released to the SATF. We are less than a month from that. The SATF gets an additional week after the report to digest it and make “suggestions” to the SBC. After that week the full Guidepost report plus the SATF suggestions must be released so we can all read it.

We have less than a month before we get to read what the SATF (four senior SBC pastors, a children’s ministry executive, a criminal attorney, and a licensed social worker, plus two unpaid consultants) “suggests.” (In quotes because that’s what they are mandated to do, “suggest” stuff to address the abuse problem.)

I’ll offer a wild conjecture here: One of the suggestions will be to establish an SBC database of sex abuse offenders and alleged offenders. There is, I think, no way in Gehenna or on God’s green earth that the SATF will NOT suggest a database. The devil will be in the details of that suggestion.

The three SBC presidential candidates have been asked about this by Tennessean reporter Liam Adams. Here are their answers: 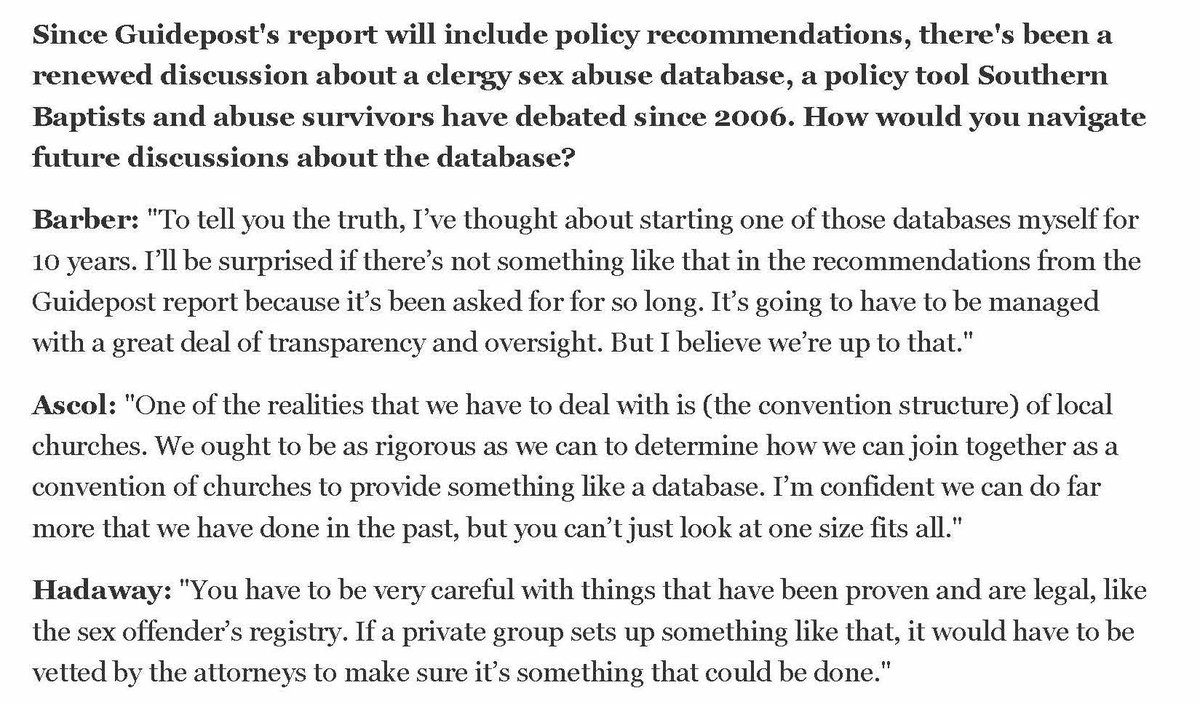 This is from Adam’s Twitter account (@liamsadams). You have to pay to read his full article in the Tennesean. Maybe I’ll pay to get past the paywall. Maybe not.

1. The database will dominate the discussion of the SATF’s suggestions. Just guessing here, but aside from some people being embarrassed by the Guidepost report, the substance of solutions going forward will be database-centered. Maybe I’ll be wrong. We will see.

2. Bart Barber: Absolutely correct in what he says, which isn’t much, but is about as much as is sensible to say at this stage. No need to get into the details until we have a proposal from the SATF and Guidepost. Barber thought about starting his own database. There has been for a couple of years an example he could follow: baptistaccountability.org. Maybe he made a note that they have a legal section that is of novella length and that the database only adds people that are already publicly reported.

3. Tom Ascol: Says nothing much. Yeah, we are a collection of cooperating local churches. We all know that. He says that more can be done and he’s right about that.

4. Robin Hadaway: Says less than nothing much. We know lawyers will be involved and we have to be careful.

I look forward to the candidates being questioned at length and in detail about the database and there are a few candidate forums coming up where this will be possible. Candidates getting into the dirty details of an SBC database probably won’t happen until there’s something on the table that will have to be dealt with at the annual meeting.

Some complicating issues about a database include: including “credibly accused” individuals; who will manage a database; who will fund a database; can sufficient  separation be maintained between a database and local churches. Is the Executive Committee up to the task or shall we create a new organization to handle it?

I’m happy to yield on this blog to any substantive discussion that might happen on Twitter about this, if such things are possible. There is no excuse for any of the candidates not being prepared for questions on a database. This has been news for over a decade.

The smart candidate answer is to defer at least until the SATF makes their suggestions.