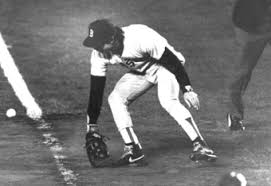 This was becoming one of the worst practices in history. I was sure to lose my starting position after all of these stupid errors. It was like the worst of Bill Buckner and Chuck Knoblauch had invaded my playing skills. I couldn’t throw to first base. I couldn’t catch a simple ground ball.

And so I did what every unsanctified high school boy does when he’s having a practice like that; I cursed and screamed out expletives while kicking the dirt. I was playing the game that I loved and I hated it.

Baseball had become my god and it was kicking my tail.

It started out as fun. A little boy sliding into bases; enjoying that feeling of getting all dirty and working hard. Diving after balls and making plays; hearing the crowd (all 12 of them) cheer. Running around the bases as fast as my little legs could carry me. Baseball was fun.

Then I got serious.

Many of the things around me seemed to be collapsing. But this was one thing that wasn’t. I was getting better and better at baseball and I was going to make something of myself. It would be hear that I would find life and meaning. Here I would become somebody. That’s why I cursed so violently on that day. Dreams were meeting reality.

The Cursing Boy is Changed

A few years after this dirt-kicking profanity-laced tirade something happened. Actually, it would be better to say Somebody happened. Jesus Christ captivated my heart. At the same time my baseball dreams were slowly coming to naught. I was 18 and could only muster playing softball in a YMCA league. That’s not quite the fast track to Major League Baseball.

As my chances to find life and meaning in baseball dwindled I started losing passion for the game. I was slowly discovering what Solomon did all those years ago; everything under the sun is “meaningless, meaningless, meaningless.” Baseball had such a stranglehold on my heart that I had to, for the most part, take a year or two off from the game.

During that year off Jesus had been working over all my idols. He was slowly grounding my identity in himself and causing many idols to topple.

After a brief hiatus I started playing baseball again. But this time it was different. I was only playing slow-pitch softball in a YMCA church league but I loved the game more than I ever did. No longer did I curse when I messed up. No longer did I feel like I had to have one of those “hard” faces even whenever I did something good. I could simply enjoy the game.

Ecclesiastes tells me why

And I commend joy, for man has no good thing under the sun but to eat and drink and be joyful, for this will go with him in his toil through the days of his life that God has given him under the sun. Ecclesiastes 8:15

You can read that statement two different ways.

You can read it as a depressed man at the end of his rope. In this case it’s as if he is saying, “Ah, forget the whole thing. There’s no point in anything anyways I’m just going to eat some ice cream, get drunk, and try to find a little happiness wherever it may be found.”

Or you can read it as a man that is now able to look through the shiny allure of all things under the sun and see them for what they really are. Solomon has found that the “end of the matter” is to “Fear God and keep his commandments”. In other words ultimate meaning isn’t to be found “under the sun”. Realizing this transforms life under the sun.

When I tried to find life and meaning in baseball it left me empty. Baseball—like sex, money, leisure, career—are meaningless gods. I cannot enjoy baseball when it is a functional savior. It was no longer enjoyable because I had strapped a weight on it that it cannot bear; namely, satisfying my soul.

As Yahweh captivated my heart baseball changed its meaning. It was no longer a god that I bowed down to. It was now a gift that I could enjoy. I could see it for what it really was a gift to be enjoyed under the sun. And I really did enjoy it. Finally, I enjoyed the game instead of worshipped it.

Solomon cries out to those of us that are searching for life and meaning, saying, “It isn’t found here under the sun”. Look elsewhere. And when you do, and you find life and meaning where it is truly to be found—in God Himself—something strange happens…

You start enjoying things under the sun.